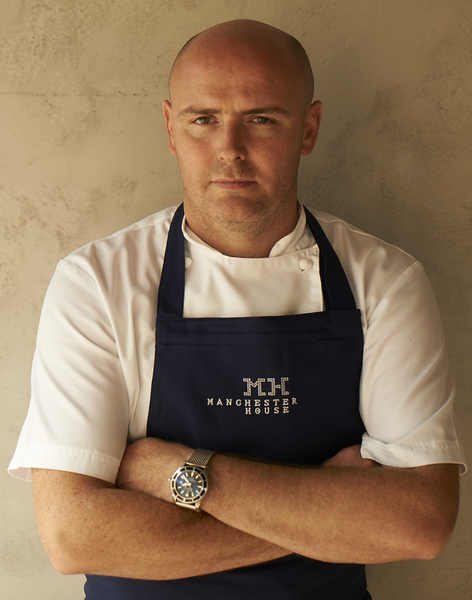 At the age of 16 Aiden left school knowing he wanted to be a chef, he enrolled at college in Liverpool and completed a two-year qualification. As soon as he began his training he knew he had made the right decision as cooking became second nature to him. Whilst at college he also got his first taste of life in a professional kitchen in a small hotel in Cheshire called Stanneylands – he was well and truly hooked.

After leaving college Aiden got a job in the Royal Garden Hotel in Kensington, London.  This was his first exposure to full-on, intense catering, the experience was invaluable. He stayed at the Royal Garden for a year then had the opportunity to work closer to home at The Arkle restaurant in the Chester Grosvenor which held a Michelin star, creating dishes for fine dining became his passion and after 2 years he moved onto another Michelin star restaurant called Pool Court in West Yorkshire.

Adlards restaurant in Norwich was Aiden’s next position, here he was persuaded into the head chef position and after 6 months we gained a Michelin star, Aiden was just 22 at the time, making him the youngest chef to ever receive a Michelin star.

After 4 years at Adlards he then headed back to London to work for Tom Aikens at Pied A Terre, incidentally Tom was the youngest chef to achieve 2 Michelin stars at 26.

Following a couple of years in London Aiden then moved on to Dublin and worked in The Commons Restaurant for 4 years, and they were was awarded a Michelin star after 8 months.

After receiving a phone call from his old pal Tom Aikens, Aiden returned to London to be head chef of his new restaurant in Chelsea, he stayed there for 3 years before leaving for The Dorchester.

It was time to head back north after the Dorchester so along with his wife, Sarah, they bought The Church Green in Lymm. The Church Green held 3 rosettes for 4 years and he also won AA English restaurant of the year for 2012. Sarah continues to run The Church Green, which Aiden still oversees.

In May 2012 Aiden met Tim Bacon, the CEO of Living Ventures, and they clicked. They immediately started working on the concept that is Manchester House. Since the opening of the restaurant in 2014 it has won a host of awards and accolades, including 4 AA Rosettes, and under Aiden’s guiding hand set the bar during an exciting new era of Manchester’s gastronomic scene.

In 2018 Aiden joined forces with the renowned hospitality Svengalis D&D and opened their first restaurant in Manchester – 20 STORIES. Since opening in March the fantastic dining room in the sky has been a phenomenal success, and has enjoyed a wealth of praise and fantastic  reviews – including Grace Den’s Guardian summary – ‘this will no doubt be one of my favourite meals of the year’. As Executive chef, Aiden will work alongside D&D in the north, building on their already enviable reputation.

His culinary expertise and accolades means that Aiden is also a big draw at many events and festivals throughout the UK. Namely the foodies festival circuit Blue Dot Festival and the hugely successful Festival Number 6.

Aiden has always been a huge supporter or national and local charities, and in recent years he has helped to raise thousands for numerous charitable organizations, including BrainWave, Christies & Hospitality Action.

Alongside Aiden’s highly successful restaurant career, he has also been a familiar face on a host of popular culinary Television shows. His appearances include Masterchef (BBC) Saturday Kitchen (BBC), Sunday Brunch (C4), Great British Menu – 4 Series (BBC), The Good Food Show (Food Network) and his work at Manchester House has been the topic of a hit documentary show on BBC: Restaurant Wars- The Battle for Manchester. Last year Aiden was part of the highly acclaimed Channel 4 show – Burger Bar to Gourmet Star, and earlier this year Aiden was part of the new BBC1 Cookery show – Yes Chef!

Aiden’s first book – Made In Great Britain  – was published in 2008 to much critical acclaim. His second book, based on his creations for Manchester House is currently in development, and will be published next year.